In Part One we explained the basic principle of not being there as the object of someone’s attack, which is to say that whatever insult they throw just goes through you or around you and has no effect on you, except to amuse you slightly. We’ll give examples of this later in this post.

We played the little game of describing this as you not starting the fight or argument, even though they threw the opening attack. Why is that? It’s because they are striking a match in the wind. It blows right out and doesn’t start a fire unless you do something to keep it going. You cup your hands around their match to protect it from the wind, you hang onto it and let it get started.

Here’s another way to see your own part in this. It’s from Master Gichin Funakoshi, the founder of Shotokan karate, the most widely practiced form of karate in the world:

“Danshi Mon Wo Izureba Hyakuman No Tekki Ari”:  When you leave home, think that you have numerous opponents waiting for you. It is you behavior that invites trouble from them.

Well, what did you do? Maybe it is your unconscious prejudice against this person. You look down on people like him. You are smarter than he is. Maybe it’s that he is your employee or he is your boss. Maybe it is the color or your skin or the style of your clothing or your accent or how you move. “But that’s just who I am!” you say. Sorry, pal. If you are a rabbit that is all you have to do to be attacked by a fox. If you are a fox, that will “start a fight” with an eagle or coyote. The rabbit doesn’t have to be caught by the fox. He can escape unscathed, rather laughing at the fox. But the rabbit can’t say that the fox had no reason to attack him.

We have more freedom than animals to control our destiny. So when someone comes up attacking you, be aware that in some way you provoked their attack. In this sense you started the fight. Now blow out the match. 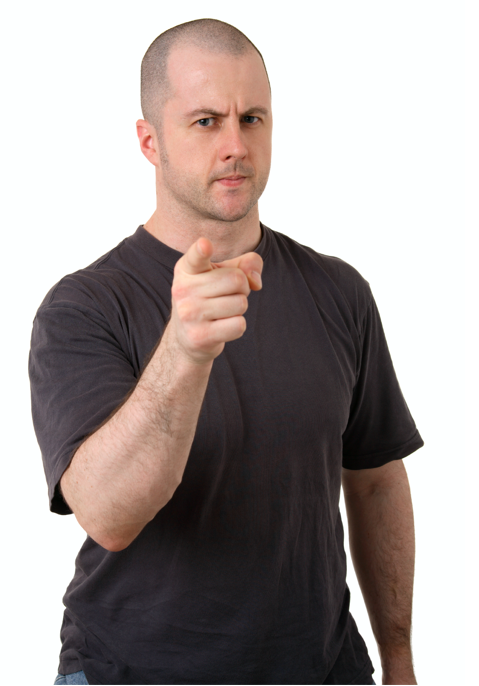 You:“Man, you don’t know the half of it! I’m that and worse!” (This is not the reaction they were expecting to get. You are there heartily agreeing with them. You have a little suppressed smile on your face. Their attack missed. They are a little confused at this point.)

Them: “Whad’ya say? I just called you a piece of shit!”
You: “I said you don’t know the half of it. There’s days I feel much worse than that!” (You are concentrating on the fact that nothing they say can have any effect on you.)
Them: “Yeah, well, your mother is a blank, blank, blank.”   (Fill in the blanks with whatever clever terms your attacker just used.)
You: “No, my mother was a wonderful woman.” (It’s as if you are the judge and they are making their very weak case to you and you just rendered your decision.)
“Well I say you are a p__sy.”
“That’s a good one there. You got a lot of these. You’re all right. Hey, brother, what’s your name? My name’s Ken. Look, I want you to know that it’s never my intention to make someone feel upset or crappy. I hope I haven’t done that. What’s your name?”
Now, you have to two things going at once here. On the one hand you have taken their most dire attacks and treated them like they are just little jibes from a buddy of yours playing

around. On the other hand this person is upset, because you are a rabbit or a fox or because their boss just yelled at them, or because you unconsciously do look down on people who look like him, but one way or the other, he is in pain. So along with the little bit of jollity you have been enjoying you have to bring in some caring about them. Everyone is valid. We are all in it together. Whatever the situation, maybe it is a heated political dispute, maybe it is an argument about mask wearing, and from whichever side, it’s true that “We are all in it together.” You can say that. You are saying that you and they are on the same level. Now you really have to feel that. There’s no faking it. If you’re there, you probably will have succeeded in not starting that fight.

Another expression or precept from Master Funakoshi: “Move according to your opponent.” You need to be sensitive. Be relaxed and alert and flexible. Take all the words and phrases or scripts from above and throw them away. This has to be improv. If you understand the basic idea you will be able to use your own words and they will be just fine.

And so as we deal with verbal abuse in the workplace, as we study de-escalation training, and learn how to handle workplace violence and workplace confrontations and harassment, we must not think of Them only as the bad guy or instigator. We have to see our own part. The master level of workplace violence training helps you to be “in it together” with the antagonist person in such a way that you defuse the confrontation very instantaneously. You blend with them and help them recover from their anger and their confused direction.